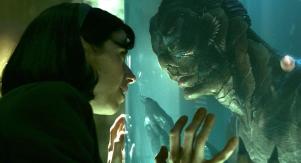 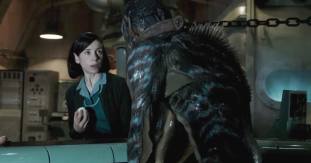 The Shape of Water is directed by Guillermo Del Toro and it stars Sally Hawkins, Doug Jones, Octavia Spencer, Micheal Shannon, Michael Stuhlbarg and Richard Jenkins. The movie tells the tale of a mute woman who works at a research facility in the 1960’s and meets this godly aquatic creature and forms a relationship which turns into forbidden love.

Going into this movie I was a bit skeptical of how much I will enjoy it considering people call it “The Fish-Banging Movie” but I did and when these two meet it’s instantly worked but most importantly it was believable. Guillermo Del Toro called this movie an adult fairy-tale and it’s the best away to describe this movie.

If you are still unsure about the main relationship of this movie, there is a scene which is my favorite scene in the entire movie. It’s between Hawkins’s character and Jenkins’s character and she’s telling him how the creature doesn’t she what she lacks or how she is incomplete and the dialogue in that scene was perfect and the scene truly worked because of the actors. Del Toro said he cast the actors based not only on their acting skills but on their eyes and how they suit the character and he did an amazing job.

Everyone in this movie is perfectly cast from Sally Hawkins to Michael Shannon. Sally Hawkins is incredible in this role and it really shows how good of an actress she is considering it’s a non verbal role technically. Richard Jenkins’s character adds a layer of realism and humor to this adult fairy-tale. His plot-line in the film is irrelevant to the story however him feeling stuck in his current state does parallel to Elisa’s story. Octavia Spencer’s character is mostly there to tell other characters what Elisa is saying, she does however carry a charm and humorous aspect to her character.

Now Michael Shannon as the villain or the big bad. I really didn’t think of this guy as menacingly evil, don’t get me wrong he’s a wicked bastard but most of the time he is an annoying obstacle. This however changes when he starts to have insecurities making him seem vulnerable. I mean it’s a guy from the 60’s who is the a racist, sexist and patriotic (in the bad way). The Amphibian Man (yes that’s his actual name) is really intriguing and there are certain scenes where he interacts with human stuff which provide some good humor but my only flaw about his character is that there isn’t a lot of information regarding his backstory and the mythology behind this creature.

This movie has great talent in front of and behind the camera. The score by Alexandre Desplat really showcases the quirkiness of the film and has gorgeous pieces in there like ‘The Shape of Water’, ‘The Silence of Love’, ‘Rainy Day’ and ‘Overflow of Love’. The set design was amazing. The effects were eye-catching and realistic especially the work on the Amphibian Man which looks great and has a unique but special design. The cinematography by Dan Lausten really captures 1960’s America really well and it’s immersive in terms of world-building.

I do have some flaws although. This could be just me but I found the scenes with Michael Stuhlbarg’s character to be really boring and they dragged quite a bit. Another flaw I have with this movie was with the relationship between Elisa and the Amphibian Man. I mean it’s great and all but in my opinion it could’ve been shown a bit more, we didn’t see them interact as much as I hoped they would.

Other than that this movie is great, it has one of the best ending to a romantic movie I’ve seen, the acting is great, the story is interesting, visually it’s gorgeous to look at. It reminds me a lot of old Hollywood type movies. All in all it’s a great piece of cinematic wonder and romance all wrapped up into a beautiful looking film. I definitely suggest you see it.