Avengers: Infinity War is directed by The Russo Brothers, Anthony and Joe. This is the nineteenth film in the Marvel Cinematic Universe which is about to celebrate it’s tenth anniversary next month in May when the first Iron Man came out in 2008. This movie is about Thanos, a mad titan hellbent on getting the Infinity Stones, which if he gets all of them and snaps his fingers with the Infinity Gauntlet, half of the universe ceases to exist. The Avengers and the Guardians of the Galaxy are in a race against time as Thanos proves to be a hard opponent to beat. This film has a massive ensemble cast featuring:

It’s really hard to review a film which is essentially big spoiler after big spoiler.

This is in my opinion, the best thing the MCU has ever achieved, 18 films all to set up this event, it’s an event, we don’t need any character development as each character safe for Thanos had a film or more to their own. Here, these characters which by now we know and love are thrown in a life-threatening situation. Infinity War is the event, the whole movie. The movie did a good job establishing this as it’s from one stone to the other, the movie never stops, it’s the longest MCU movie yet it feels like the shortest.

The Russo Brothers did a decent job splitting up these characters into groups. I say decent because Iron Man’s group and Thor’s group are well assembled and everyone has something to do. Captain America/The Nomad’s group is a mess, they left all the characters which were left into this group and it was too much which unfortunately results in one serious lack of characters. Don’t go see this film only if you are going to because of Captain America or Black Panther because you will be immensely disappointed at least I sure was for the lack of both these characters. I wouldn’t say immensely disappointed but you will be let down for sure. 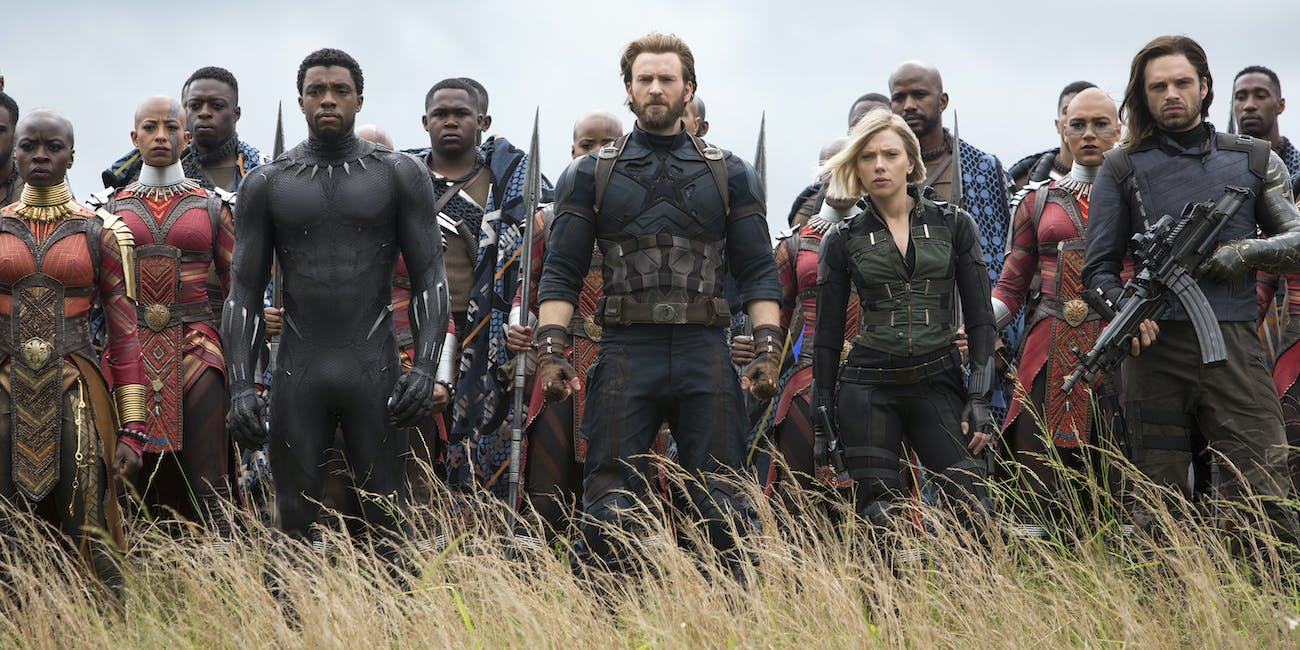 However if you want to see Thanos shine in all his glory, you are in for a treat. This is very much Thanos’s film. The best compliment I can give is that whenever he appears you are immediately afraid for these characters, he IS a force to be reckoned with.  He’s a threat but he’s not your typical villain, he is a major improvement over past MCU villains although they just keep getting better and better with this phase. He has a motivation, he will do anything but he isn’t heartless. Like for example Kylo Ren from the new Star Wars movies, they both  think they are the heroes of their own story.

The Black Order or the Children of Thanos as they are called in the film were decent, three of them were just typical henchmen but one of them, Ebony Maw stood out. While he still was a henchman he had more to do and even with the little screen-time that he had, he wasted none of it, he was entertaining and ruthless and really fun to make fun of as seen in the first couple of scenes he is in.

One thing which I will say impressed me and made me really happy for Marvel is it’s reputation. At my local cinema you see a couple of people at a Marvel movie but it’s never packed. When I went to see Infinity War, it was the most packed I had ever seen it become. Not only that but the audience actually participated, there were gasps, laughter and crying. Speaking of crying I saw a little maybe six year old child bawling his eyes out after the movie ended. This movie does take it a bit too far for children, if a child is below eight years of age, they shouldn’t see this movie. Unless you think they can handle this movie, I mean this movie can traumatize them seeing certain characters suffer or worse ( no spoilers ).

The performances were great, I believe that some actors had much more variety in this movie than they did in any of their own movies script wise. For instance Chris Hemsworth is great in the more emotionally demanding scenes, same with Chris Pratt. What I love about this movie is how it pins it’s characters to each other in terms of dialogue. Downey, Pratt and Cumberbatch played brilliantly off each other in both the humorous scenes and the more serious and dramatic scenes. Although in my opinion the real prize the movie gives us is Josh Brolin playing this amazing character. This is his role no question. He adds so much  while keeping Thanos ‘realistic’ and grounded. Whenever you see him in this movie, it’s all captured on his face, the expression of what he’s about to do if does get all of the Infinity Stones.

Also what an ending! This is easily the best ending from the entire MCU, it’s fresh, it’s poetic and it’s dark. It’s a cliffhanger and you might feel angered that you have to wait an entire year for Avengers 4 but it is a brilliant ending. This brings to one of my highest praises to the movie which is the musical score by Alan Silvestri. This score is sophisticated, heroic and it perfectly captures every emotion you felt whilst watching the movie. It’s dark but not ultimately hopeless, in a way it’s like what the characters are feeling, a flicker of hope in what seems like an impossible thing to do.

I really enjoyed this movie, it was intense and shocking to say the least. The characters are never forced, it has a fresh ending and it’s an event that demands to be seen on the big screen. They say a movie like this is only as good as it’s villain which in this case it’s true. It’s fantastic and I cannot wait to revisit this movie!