When Max Mutchnick and David Kohan created NBC’s Will and Grace, it was huge back in the early 2000’s but it was cancelled in 2006 having finished it’s eight season. It had a proper series finale and fans thought that that would be the last time they would see Will, Grace, Karen and Jack. To everyone’s surprise, the cast filmed a political short to urge people to vote and it went viral on YouTube so NBC decided to revive the show after a ten year hiatus with new episodes starting in late 2017. The revival has been met with rave reviews with most people saying that the show is better than ever.

I’m only on Season 2 but I wanted to see myself how great this season is. I planned to watch only a few as opposed to watching the whole season since I wasn’t caught up but this show is really addicting, it’s funnier than ever and it’s surprisingly serious at times. I couldn’t stop coming for more. Most modern revivals don’t feel as natural as this one does, it almost never feels the same, this is not the case here. Eric McCormick, Debra Messing, Sean Hayes and Megan Mullally are back and they are better than ever! The cast never felt out of place, it’s natural to not fully get into the same character after a ten year break but this cast does it like they never had left. Also the writing is also on par with the older season. I was worried that since it would be based in modern times it would feel a bit cringy but instead they make fun of most trends which makes for some hilarious humor.

I am going to talk about certain episodes that stood out to me. This season had some great topics to talk about and I was genuinely surprised that they included them, it made the show even stronger and it proves that this is not your average sitcom. These episodes in particular really stood out to me: Grandpa Jack where Jack finds out his grandson is gay as well and he is being taken to a Camp to be straight. It teaches the audience to be yourself and nothing else and Jack showed a side that we’ve rarely seen from him. Another episode is Rosario’s Quinceañera which revealed that Rosario passed away from a heart attack. This episode was really emotional to long-time fans, hell it was emotional for me and I started the show a few months ago. Again here we see Karen going through grief and dealing with loss and it provided a lot of character development for her and I loved seeing that. Perhaps the most episode in this season is The Beefcake and the Beef Cake where Karen orders a cake to host a presidential party and the employee who is against the president refuses and it’s a really important episode because it focuses on civil rights. It’s message is a hard one to put out. Even if you hate the president, you can’t refuse someone who’s in favor of him, it goes against belief and with that logic, no one can have civil rights because they won’t affect anyone.

The funniest episodes by far were A Gay Olde Christmas, There’s something about Larry, Who’s Your Daddy? and Staten Island Fairy. The whole cast looks like they’re having the time of their life playing these characters again and it definitely shows in those episodes. Let’s talk about that finale. I had no idea it was a two-parter so when Part One said “to be continued” I was intrigued to see where they would go with it. I was a bit disappointed with the finale itself, it was very cliched and the arc with Jack moving on was really rushed, they shoved everything to the last two episodes and it really shows. That being said I am still and obviously excited for Season 2! Hopefully we’ll make it to Season 2 of the revival unlike a certain sitcom *cough cough Roseanne. Also did you know that a single person directed this entire season, James Burrows! Someone give him a raise!

Finally the revival of Will and Grace has proved that not all revivals are bad in fact this one gave the whole show a boost. It’s fun, energetic and hysterical. The cast is better than ever and even after 11 years, the energy is still here and it’s not going anywhere from the looks of it.

Will and Grace: The Revival – Season 1 will be available to own on 11th June.

If you want to pre-order it, click the picture to go to Amazon UK! 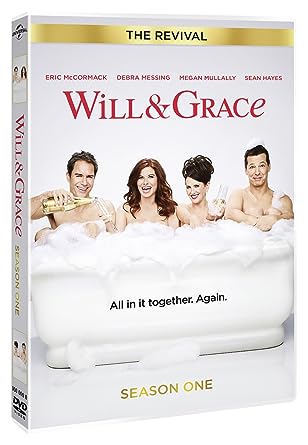