Since the teaser trailer for this movie came out I was astonished by this movie. From it’s unique look and feel. This doesn’t feel like any Spider-Man movie we’ve ever seen for sure. Also it’s Miles Morales’s first ever movie so that’s worth a celebration on it’s own. With this new trailer I was excited and scared because the teaser was very vague so I still didn’t know anything about it.

This is easily one of the best looking trailers I have ever seen! This movie will break new  ground in the animation world. It’s so refreshing and unique, I bet it will look out of this world in 3D, I seriously cannot wait for it to come out. Sadly this movie comes out Christmas time so we still have a while to wait.

Time to talk about what the trailer showed us.

From the beginning we see Miles in his room and here we already have a sense of the tone of the movie or at least of Miles’s character. I love the father and son dynamic in this trailer between Miles and his father. The bit at the end was precious and hilarious.

Then Miles starts to explain the different universes and we see a glimpse of the scene where him and Peter meet while Peter is fighting a villain and both their spider-senses  get triggered. Before this there is a shot where Peter is in his suit and he is jumping off a building like how Miles did in the teaser.

Next we see a shot where it looks like Miles has just gotten his powers because he is freaking out and the best part is that it looks like an actual comic with phrases across the scene, in other shots there are the speech bubbles like there’s an explosion at one point and it says “BOOM”. That adds a lot of authenticity to the movie because when movies use comic book tropes they just imitate them but this actually uses them and puts them into the movie.

Now there is Peter and Miles in a diner and we get our first look at Peter in this movie without the mask on. This version of Peter is way older and more experienced obviously. He is playing the role of Miles’s mentor.

What comes next is a montage of cool things happening so there’s not really much to discuss. Also we’ve seen a few shots already from the teaser. So here’s a couple of awesome shots from the montage:

Then the logo appears and there’s an extra scene which reveals that Spider-Gwen will also be featured in this movie as well. Her iconic look hasn’t changed. My only worry is that they’re rushing the multiple Spider-Men/Women storyline. General audiences were never exposed to these characters not even Miles on the big screen so they have quite a lot to do to makes these new additions feel normal. 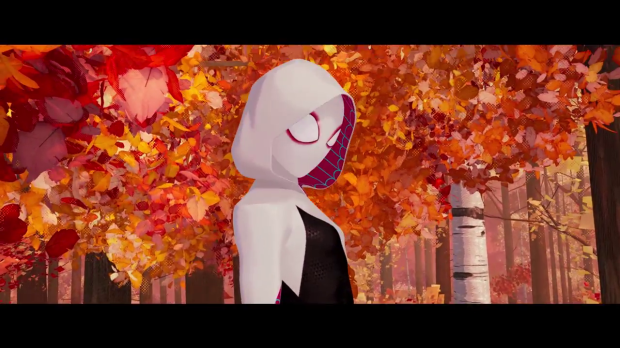 So what do you think of this trailer? Will you be watching? I sure am.

Spider-Man: Into the Spider-Verse comes out in December 2018.