The Flash is developed by Greg Berlanti, Andrew Kreisberg and Geoff Johns. Greg Berlanti not only directed Love, Simon one of my favourite movies of the year but he has creative control over most CW shows including Riverdale and all the other DC shows. Talk about an impressive résumé. This season focuses on the world’s fastest man alive (The Flash) going head to head with the world’s fastest mind (The Thinker). It stars Grant Gustin, Candice Patton, Carlos Valdes, Danielle Panabaker, Tom Cavanagh and Jesse L. Martin.

I was a huge fan of the first two seasons, I have them on DVD and I supported the show like a crazed fan. I thought Season 3 was a mess and in my opinion Season 4 is unfortunately the weakest season so far. There is what I like to call the fourth season CW curse. Arrow’s fourth season was unwatchable, I spent a whole year to finish it and it caused many people to drop the show. With The Flash’s fourth season, while it isn’t as bad it does repeat a lot of the problems that Arrow’s fourth season had. Both seasons saw the heroes going against new and “out of their comfort zone” villains, Arrow had to deal with a magic man and Flash had to deal with a non-speedster.

In my opinion Season 4 of The Flash was better executed than Season 3. The story was fairly simple as I explained in the beginning, it’s your average good vs bad story. What really brings down the season is a common problem another CW show had. Riverdale and The Flash have way too many episodes. Season 4 has some of the best episodes of the entire show but the ratio of great episodes to bad ones is awfully unbalanced. This is a show which would take a whole three quarters to make the characters realize something obvious. As a season, the pace is really slow.

I’m not regularly a fan of new characters that appear in one season and then never appear again. I was so against the character or Ralph that it ruined the show for me. The Flash was praised for striking the balance between fun and serious in the first two seasons, Season 3 was “too dark” and no fun and Season 4 is all “fun” and jokes. Ralph is ridiculously annoying, even the characters in the show are annoyed by him. This season has been filled nonsense jokes and silly, childish humor. It’s too light. I loved the relationship between Joe and Cecile, I like the warmth and maturity of their relationship. As for Barry and Iris I liked their relationship, it was never too much and I like both of them so they never bothered me. I thought the relationship between Cisco and Gypsy was underdeveloped and was never going anywhere. I am disappointed with how they treated Killer Frost and Caitlin, they never solved their arc this season, her arc seems to always be less important even though the fans clearly want more of it.

On the bright side, the suit has never looked better. This is definitely my favourite one so far. Also am I the only one who notices that as the seasons go on the music gets more and more stale? Season 1 had an amazing score but then the following seasons just have bits and pieces of that score mixed with an average score. I do know that Blake Neely has a lot to compose, he does the music for the other DC shows as well as Riverdale. The performances are decent, in my opinion Gustin and Valdes are the real standouts this season, especially with some much more emotionally demanding scenes. One of my favourite episodes this year so far was Season 4 Episode 15: “Enter Flashtime”, Gustin really delivers in that episode.

I would say that this season wasn’t all over the place like the previous one, so it has that going for it but I can’t say I enjoyed this season because I’d be lying. This season felt like a chore to finish just for the sake of doing it. I believe that if they reduced the episode limit and focused on the characters a bit more, t would be enough to improve it. I was consistently disappointed with this season, and true there are some fantastic episodes here and there, I’d prefer a whole season with that quality. I will be watching Season 5 and I honestly caught up on Season 4 this early to get ready for the Comic-Con footage.

The Flash: Season 4 is available for Pre-Order now. 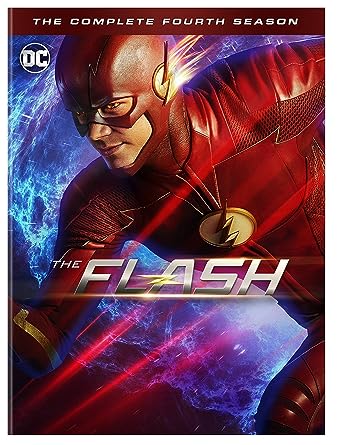