Tom Clancy’s Jack Ryan is created by Carlton Cuse and Graham Roland. It is the first ever television series that features the titular character. He has been played by four different actors and now it’s five with John Krasinski taking the lead role as Jack Ryan. Usually the movies would be based on the books written by Tom Clancy but this show is completely original, story wise. This time Jack is faced with two difficult tasks. hunting down a terrorist who is doing some serious damage and balancing his double life as an agent. The show stars John Krasinski, Wendell Pierce, Dani Shihabi, Abbie Cornish and Ali Suliman.

This review will feature a new perspective as I have John Krasinski is my first Jack Ryan. I haven’t watched the movies so I’m not familiar with Harrison Ford, Alec Baldwin, Ben Affleck or Chris Pine’s version of the character. I haven’t read the books either so this show was my introduction to the world of Jack Ryan. From what I’ve seen I am both happy but somewhat unsatisfied. While this new show delivers on the action and the story, it fails in the character aspect.

Most reviews said this was an average action spy show. I agree and disagree. While I do agree that it’s very generic in it’s plot and it’s characters, the action scenes are thrilling and fast-paced and the twists and turns are unexpected and original. So it’s a mixed bag. One of the main reasons why I watched the show is John Krasinski, he is one of the best people working in Hollywood right now, I love him in The Office and A Quiet Place is my favourite movie of the year so far, so I was interested in this. I was almost certain that he would be the best part of the show given his natural charisma and good acting. So you can imagine how disappointed I was when I finished the season. Not only was he barely used in the action scenes but at times he came off as a bit unlikeable thanks to his impatient and slightly narcissistic nature. 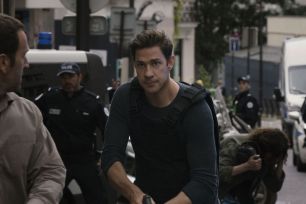 Let me be clear, I didn’t hate him or anything, in fact Krasinski was great, he did a lot with the little his character was given to do. For a show with his name plastered on it, I feel like he should’ve had a bit more to do. Hopefully with Season 2 that can change. The rest of the cast was amazing. I loved Wendall Pierce as Jim Grier, he and Krasinski work off each other very well. Their dynamic is easily one of my favourite parts of the show. I like to consider Jim Grier the voice of reason in the show, he calls out anyone on their shit and tells it to them as it is. He’s badass and likeable, the ultimate package in a show like this.

However the standout role of the season easily goes to Dani Shihabi who is amazing as Hanin. She was able to portray a strong female heroine who keeps her family safe, hard choices and all. Although she did get less to do near the end of the season. Also Ali Suliman is great as the antagonist, Suleiman. He is one of the best TV villains this year. The show made me care for him and hate his guts at the same time. His motive was sadly realistic. However I didn’t really like how his story ends. It was too anti-climactic for a show like this.

This show really opened my eyes in terms of how the world works. Life is like a game only it picks a random avatar for you and dumps you somewhere in the world. (Great analogy, I know). This show made some really fair points about today’s society and mentality. It’s crazy how religion and where a person lives determines their future for better or for worse. I love the conversation that guy had with Jim about Cincinnati and if he had lived there he would’ve turned out a lot different. Or how Suleiman became the terrorist he is now. It’s really sad and realistic and I’m so glad this show sheds light on that subject.

Also the shows has some incredible twists for example the virus being hidden in the vitamins and supplements for the doctors was genius and unexpected. Speaking of unexpected, I was surprised by the choice of terrorist attacks that were showed.  Specifically the church scene and the restaurant bombing. Both have a sense of horror to them. If I’m being honest it made me a bit paranoid because it wasn’t that difficult to pull off as seen in the show. They were clever but horrifying to watch. One of the best scenes in the show is when the police open up the church to find all of those dead bodies with ringing phones from alarmed friends of family. That was disturbing to watch. Forget about the supernatural and slasher horror movies, this is true horror because it can actually happen. Especially today.

Overall the first season of Jack Ryan definitely shows a lot of potential and I am excited to see where Season 2 takes the story. While it’s lead isn’t the best part of the show, the surrounding characters make up for it. Although it can be a bit too real at times with the disturbing acts of terrorism, with it’s intense action scenes and clever twists, it makes for an enjoyable binge-watching session.