Glass is directed by M. Night Shyamalan and it is the final chapter in a surprise trilogy made up of Unbreakable, Split and now Glass which is called the Eastrail 177 Trilogy. In this final chapter Mister Glass, The Horde and The Overseer also known as Elijah Price, Kevin Windell Crumb and David Dunn are all trapped in a mental institute under the eyes of psychiatrist Ellie Staple who believes that these men are mentally unstable. This movie stars James McAvoy, Samuel L. Jackson, Bruce Willis, Sarah Paulson, Anya Taylor-Joy, Spencer Treat Clark and Charlayne Woodard.

I remember watching the trailer for Split and thinking what a great concept it has. When it came out, everyone was raving about the twist ending that it had secretly been an Unbreakable sequel. At that time I had heard about Unbreakable but I had no idea what it was about. Fast forward two years, I watch Split, good movie, not particularly special but an overall decent thriller. Then the Glass trailer came out and I finally watched Unbreakable which has become one of my favourite movies of all time. I was undeniably excited for this movie and after hearing the disappointing reviews I was confused as to why it was so bad. I had to go see it for myself and I have to admit that I don’t understand where there is all this hate.

Immediately as the movie began, I was instantly transported into this world. If there is one great thing Shyamalan does that no one can deny it’s his ability to create a unique atmosphere. It felt like an episode from The X-Files mixed with superheroes. It’s immediately unsettling, the incredible musical score takes over and from then I was in a for an experience. After the movie ended, I thought to myself how lucky I am to witness a trilogy like this, the fact that it exists is a miracle! Nowadays Marvel and DC have taken over, I too love their movies but the fact that even in the modern age of superhero fatigue, there is still an audience for this type of movie amazes me.

The movie starts with a bang, it got me hooked instantly as I said. However it then takes a screeching halt once The Horde and The Overseer are put into that hospital. From then up until the third act, it’s a different movie. It’s a slow burn psychological thriller, people say that it resembles Unbreakable’s pace. I actually disagree because in my opinion Unbreakable had a a much faster pace and was entertaining consistently. Glass however makes you wait and wait and wait. It’s a bit ridiculous how almost nothing happens for the entire second act. It’s just a lot of conversations and planning which does pay off but it just took too long.

The performances are amazing as expected from this wonderful cast. James McAvoy shines once again as The Horde showing off his incredible range. For such a charming guy he really knows how to be creepy. There is a scene in a pink room where Ellie is talking to all three of them and for a while the camera focuses on James’s face. It’s a credit to his acting cause not I only was I put off but I saw it with a friend who loves horror movies and it takes a lot to scare him and it even bothered him so bravo McAvoy. 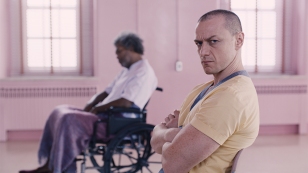 Samuel L. Jackson is amazing as Mr. Glass, you can tell he was having fun playing him. I do find it odd that the titular character doesn’t say a word in the first half of the movie. It does play into his master plan but still. Bruce Willis is also great as David Dunn, however he was easily the weakest character of the three. He is left to the side for most of the movie which is sad considering how this movie is the culmination of the story for these characters. ‘

The ending of this movie is an emotional roller-coaster, twist after twist after twist. I gasped out loud during one of them. It was a ballsy move on Shyamalan’s part to stick with the ending. At first I was conflicted but after thinking about it, how is a movie like this with these characters supposed to end? I also loved how the ending goes back to what Unbreakable tried to accomplish but on a larger scale.

I have to give Shyamalan credit again for his insane ideas. When the final battle was about to start, I thought, ‘Am I actually excited to see a middle-aged guy in a poncho fight with a shirtless guy with beast-like powers?’ The answer is yes and that’s due to the incredible score, the writing and most importantly the characters. This trilogy made me care for them and so I was invested in the story. I can definitely see why some people might hate this movie but then again they would’ve most probably never seen Unbreakable. Do your research people!

Overall Glass is a unique experiences with an eerie atmosphere that hooks you in until the very end. Shyamalan manages to keep it fresh every step of the way, especially in the ending which might upset people. The great performances are lead by a talented ensemble cast which truly bring these characters to life. Finally Glass twists the blueprint for final chapters on it’s head, creating a unique trilogy that will stand the test of time.