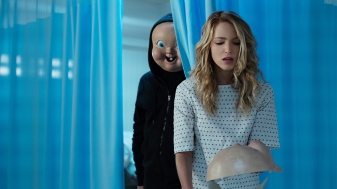 (from left) “Babyface” and Tree (Jessica Rothe) in “Happy Death Day 2U,” written and directed by Christopher Landon.

Happy Death Day 2U is directed by Christopher Landon. This sequel follows Tree living her best life, that is until she gets stuck in another dimension reliving the same day over and over again until mysterious killer Babyface gets to her. Until she figures out how to get back home, she has to keep reliving the same day but is there a limit to how much killing she can take? The movie stars Jessica Rothe, Israel Broussard and Phi Vu.

I remember hearing about the first movie but I never got around to watching it. Now with this sequel I had the perfect opportunity. I actually really enjoyed it. When it comes to a either a movie, or a show, anything involving a story basically, I always look at it from these two aspects, the characters and the concept. Happy Death Day has both. The sequel fortunately carries this tradition of combining likeable characters with an interesting characters. Because of those two, the movie is already a step above average horror movies. That and one other reason.

The other reason is bringing in other genres to merge with horror. The first movie used comedy and mystery. Happy Death Day 2U brilliantly uses sci-fi and comedy to aid the horror elements making this movie a breath of fresh air. What’s brilliant about it is that these different genres don’t clash into each other, this movie does not have tone issues. Instead it infuses these genres into the story making them feel natural. However what shocked me the most was how emotional it got at one point. It actually brought me to tears. This emotional arc leads to a major decision which Tree has to take and I love how the movie explored that.

As I said this movie has a group of likeable characters. They are brought to life by the talented cast, especially Jessica Rothe who gives it her all with this performance. She is great in the action scenes and also in the emotional scenes. Israel Broussard is as nice and charming as he was in the first movie. These two have great chemistry. I like the dynamic between them a lot. Phi Vu was surprisingly underused as the movie opened with him but nonetheless he is still funny with the little he’s given. There are these two new side characters which don’t really do the movie any favors. They’re there and they’re sort of needed for the plot. There is also this incredibly annoying college dean who literally acts like an obstacle in a video game.

One aspect which was dialed down significantly this time was the horror. Babyface almost disappears, it appears in the beginning and the end. Because of that, the horror elements are weaker this time. Another thing I noticed is how it relies on past sci-fi material. I am a huge fan of Back To The Future and The Flash and so this movie did feel a bit familiar at times, particularly in the second act. The ending is a bit anti-climactic, I wasn’t aware of the end-credits scene and so I missed it. It’s also disappointing how poorly this movie is performing at the box-office. I really hope it gets a sequel making this franchise a trilogy. If not released theatrically, at least online or direct-to-dvd. It’s too early to say goodbye to these characters and the possibilities with this concept are endless so they have more stuff to work with.

Overall, Happy Death Day 2U satisfies on most levels. It takes a bit more risks than it’s predecessor with tone and writing but it pays off. This movie does the slasher genre proud. With great performances, likeable characters and an enticing concept, this is a sequel which proves that there is more story to tell in regards to this franchise albeit a bit familiar to the sci-fi fan. It’s a fun and entertaining thriller worth checking out.