If you are reading, chances are you have watched Jordan Peele’s Us, if you haven’t I highly suggest you stop reading, watch the movie and come back to discuss the many things Us gives us to talk about. The way this spoiler review will be split is into different sections, if you want to discuss one first, go ahead!

This is one of those movies where no one has any clue to how or when the movie will end. The ending to Us features the twist that Adelaide and Red swapped places when they were young in the Hall of Mirrors. Many people weren’t shocked with the twist, if I’m being honest, it definitely crossed my mind a couple of times during the movie. However while the twist wasn’t that effective in terms of shock and awe, it did change my overall thoughts on the movie. By the end of the movie there is no villain. I don’t see either Red or Adelaide as strictly bad. They did do some horrid stuff, specifically Adelaide’s true tethered version.

Both were in desperate need to stay alive. Red took her opportunity and swapped places and Adelaide went through a long, complicated line of planning to overtake the world from above in a violent way. The reason why I think that the twist and ending worked so well for this movie was because not only are they though-provoking and spark a lengthy conversation but also because it feels complete and in a way it is, the tethered version of the Wilsons are dead or at least most of them. Some might call it a cliffhanger, I call it ending the movie on the best note possible. Especially with the sinister smirk Lupita Nyong’o gives to her son.

Does Adelaide remember what she did to Red when they were young?
I remember a scene in the beginning where the Wilsons have just gotten to their summer home, Adelaide goes to the laundry room I believe and finds a box with childhood items and she stares wondering and the shot stays on her face. Her expression to me was like a mixture between pride that she is here, far from where she was but at the same time trauma because she’s back to where she started.

You know how in musicals or action movies sometimes the only scenes you want to watch are the musical numbers  or the action scenes? Us is similar in that way only it is entertaining and engaging all the way through. However it does have a couple of scenes which really stand out to me. Four scenes in particular. The first being the opening scene which bleeds through the movie in snippets until the big reveal. It was atmospheric in a fun, summer amusement park type of way and scary and ominous as the scene progressed. The unsettling score by Michael Abels really sets the mood perfectly in this scene.

The second scene I loved was when the tethered version of the Wilsons broke in to the “original” Wilson house. Peele mentioned that before that scene, time was moving rapidly, the events that occurred were shown in quick cuts and they were very fast paced. However once the day turns to night, the shots are longer and it’s shot in present time, there are no time jumps from this moment onwards. It is incredibly alarming and unsettling when they break in, what’s going to happen next? 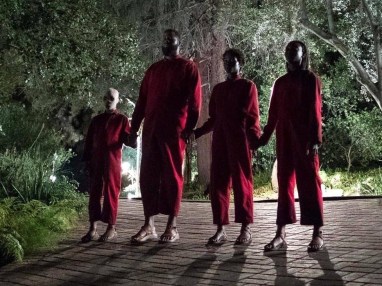 The third scene happens slightly afterwards when the tethered version of the Tylers invade and murder the original Tylers. In my non-spoiler review I said that this scene was the perfect blend of horror and dark humor. The joke with the song Fuck Tha Police had people in my screening gasping and laughing at the same time. The last scene is relatively short but it was so funny I had to mention it. At one point the Wilsons are discussing who had the highest kill count, the brother and sister were protesting over the fact that they murdered their neighbours. It was funny, it was needed but at the same time since the humor was dark and it wasn’t over the top or anything, it didn’t disrupt the tone of the movie.

The rabbits and the sheers are not there just because they look creepy. In an interview Peele said that rabbits have a very violent behaviour and they multiply very quickly so the tethered have more to eat. Also the place in the Hall Of Mirrors in the basement is literally called The Rabbit Hole so Adelaide went down the rabbit hole like Alice did in Alice in Wonderland and if you think about it Wonderland is a weird version of the world above it just like the Rabbit Hole.

The Sheers / Scissors are shown countless times throughout the movie and they are the tethered’s main weapon. Sure they look scary and they match the outfit but it goes beyond that. Scissors are an object made of two parts, these parts are stuck together, just like how the tethered and the “original versions” are stuck together. A pair of scissors sort of represents a whole human body with a body and soul. The tethered are the body, the originals are the entire package. Red mentions how they failed to replicate the soul.

In the end you can watch Us and ignore all of the hidden meanings and theories and enjoy it as a high concept horror movie made really, really well. However without thinking about it, with each viewing, you’ll notice something different or another hidden clue that leads to the big twist. It’s up to you to figure out how deep you want to go down the Rabbit Hole.

Us is in cinemas now.