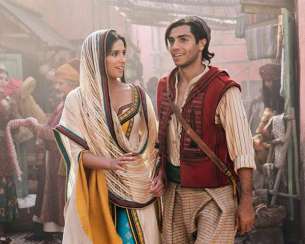 Aladdin (2019) is the live-action adaptation of the 1992 animated classic with the same name and it is directed by Guy Ritchie. This movie follows Aladdin a street urchin who finds a magic lamp which holds the powerful Genie who can grant anyone three wishes. Aladdin tries to use his wishes to win the heart of the Princess but the evil Jafar has other plans for the Genie and is on the search for him. The movies stars Mena Massoud, Naomi Scott, Will Smith and Marwan Kenzari.

Everyone has seen Aladdin at one point in their life, everyone knows the story, the characters and the catchy songs. The movie set a very high bar for this remake but as we all know nostalgia sells a lot of tickets. This is proven by the fact that live-action remakes are everywhere, in less than two months, The Lion King remake comes out. My point is that we know that we can’t stop these movies from coming out so at least we can go in and hope for the best, which is what I did with this movie and I came out with a satisfied smile on my face.

With this movie I don’t think Disney was going for critical acclaim or academy awards. Their goal was winning over the audience and getting the money, which worked. My screening’s audience was absolutely loving the movie. The children were having fun, the parents even more so. This movie is truly a crowd-pleaser. It was really fun to be in an audience which is having a great time consistently throughout the movie. It made me like the movie even more. That being said, this movie is just fine.

While Aladdin (2019) is stunning visually, everything else lacks in comparison. This movie doesn’t take risks, it is a safe, exact copy of the original just in a different medium. It isn’t as exciting, romantic and adventurous. It doesn’t replicate the magic of the original in almost any way. On the bright side it is a fast-paced movie, so it will be over before you know it. The movie gives you what you want immediately, one big musical number after the other with some iconic scenes here and there done in live-action. Seeing the movie for first time gives that exciting aspect of wondering how this scene or that scene will be done in live-action and the big musical numbers did not disappoint.

I have to admit, I was a bit nervous to see them since they weren’t even advertised all that much. Having seen the movie I am so happy to say that the musical numbers were all that I hoped they would be. One of my complaints regarding the Beauty and the Beast remake was that it was shy and scared to go over the top with it’s musical numbers. In my opinion “Be Our Guest” has very low energy. This movie however turns it to an eleven (in some cases). “Friend Like Me” was fabulous, energetic and unapologetically over the top as it should be.

The other musical numbers failed to rise above the very high bar set by “Friend Like Me” but they were still energetic, fun and faithful to their animated counterpart. “Prince Ali” was also over the top, obviously not as much as the animated version but still fun nonetheless. “A Whole New World” was not as transporting as I would have hoped it would be. However the chemistry between Massoud and Scott was so present and the beautiful visuals really helped to bring it home.

As for performances, everyone did their part quite well, considering the only source they had was their animated character. I was a bit skeptical of Massoud, if I’m being honest but he is truly Aladdin. He is quirky, charming and playful in his performance. He has a way with how he presents himself as Aladdin which makes him very likable and charming. Naomi Scott was the perfect Jasmine, she brings everything which made animated Jasmine an icon to the bring screen with ease. She is a strong, independent and kind role-model for the young children watching. She may be the best live-action Disney princess we have ever gotten.

The controversy around Will Smith’s Genie is going to seem so stupid after everyone watches this movie. He is one of the best parts of the movie, if not the best part of the movie. Smith brings so much energy to the role, it’s almost impossible to not like him in the role. He makes the role his own by adding his own spin on some of the famous lines and even adding a couple of new iconic lines himself. The one performance which I did not really like was Jafar’s. Marwan Kenzari’s Jafar is a much more tame and calm Jafar. He just doesn’t work for me. I didn’t find him to be evil, just annoying and in the way.

Overall Aladdin (2019) honours it’s animated counterpart by following it as closely as possibly making this movie a literal live-action clone. The slight changes don’t really affect the story all that much. Even though it is fun and entertaining, it lacks the quirkiness and magical quality of the original. That being said, the performances are great, the sets, visual effects and costumes cast a spell on the audience as they help the audience truly transport to Agrabah. However in the future when you are going to sit down and watch Aladdin, chances are you’ll pick the animated classic over this one. That being said if your family is looking for a fun time at the cinema, this movie can give you that.