In Disney’s BEAUTY AND THE BEAST, a live-action adaptation of the studio’s animated classic, Emma Watson stars as Belle and Kevin Kline is Maurice, Belle’s father. The story and characters audiences know and love are brought to life in this stunning cinematic event…a celebration of one of the most beloved tales ever told.

Beauty and the Beast (2017) is directed by Bill Condon and it is the live-action remake of the beloved 1991 animated classic. Just like in the original movie, after a spoiled, rude Prince denies an old beggar woman shelter, she reveals her true form as an Enchantress and curses the entire castle, in doing so turning him into a beast. The only way of breaking this curse is if there is mutual love between the beast and someone else. This movie stars Emma Watson, Dan Stevens, Luke Evans, Josh Gad, Emma Thompson, Ewan McGregor, Ian McKellen and Kevin Kline.

Since Disney released both the Aladdin and Lion King remake this year and since I have already reviewed Aladdin and am waiting to see The Lion King to review that, I thought it would be fun to review this movie. After all, these three movies are the trifecta of Disney magic in the nineties. I had watched this movie back when it came out but I decided to watch it again after having seen Aladdin to see not only which I liked more but which one is the better remake and how much liberties they took when it came to changing the source material.

The animated Beauty and the Beast is probably my favourite animated movie from the mouse-house. I have basically memorized the movie at this point. When I found out that they were remaking the movie into a live-action movie, I was ecstatic. It is one of those movies for me and so that meant that this remake had a very high standard to live up to. I remember sitting in the theater after the movie had just ended and I remember feeling content and satisfied. I enjoyed it for what it was. However as time went on my opinion changed thanks to the multitude of negative reviews. It was only because of Aladdin that I decided to rewatch this movie and give it another chance. Upon rewatch I can happily say that I did change my opinion on this movie and I appreciated it far more this time.

What I appreciate the most about this movie is how it actually is a remake. I can actually separate the original and the remake, it’s not an exact copy. Disney actually took risks and changed and added a lot to the original story from the animated movie. The Belle and Beast from this movie are not the Belle and Beast from the animated movie and I love that. This movie has it’s own personality and for a remake that is the biggest compliment you can give it. It has a different tone, atmosphere, colour palette and as I mentioned the story is updated.

This is definitely one of Disney’s most gorgeous movies. This movie felt like a fairytale brought to life, it was magical. The sets, costumes, visual effects, everything looked amazing. It’s a movie which is aesthetically pleasing to the the eye just like a fairytale should be. One aspect of any Disney remake which I can always defend is the music. The terrific and incredibly talented Alan Menken returned to compose the movie’s score and to write three new songs. I am in love with the score of this movie, Menken did a tremendous job updating the original score and he added a lot to it. The three new songs, “Evermore”, “How Does a Moment Last Forever” and “Days In The Sun” are all wonderful and are done in a way that feels natural and they fit right in with the other songs. “Evermore” is a personal favourite of mine.

When it comes to updating the story, this remake makes some wise choices and some not so wise decisions. For example a wise choice this movie made was explaining why the Prince was rude and unkind and give him some backstory. An unwise choice was to make Gaston a soldier who served in the war instead of a professional hunter. It made much more sense in the animated version because he treated Beast like his prey. This movie has a lot of moments like that where it either elevates a scene or downgrades it.

The cast does a great job of making these characters their own. Emma Watson’s Belle is more reserved and impatient than the Paige O’Hara’s Belle. I can definitely see why she was cast and while I loved her performance, I wasn’t really sold on her emotional scenes. Dan Stevens as the Beast is a wonderful change to the animated Beast. While the animated Beast was much softer when Belle started to warm up to him, this Beast felt more insecure and awkward than anything else but it’s a nice change. Luke Evans’ Gaston is a much more menacing character than his animated counterpart. I loved his musical number the most, it was delightfully broadway-esque. 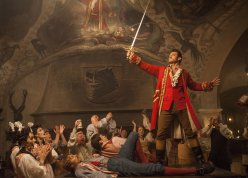 Overall, Beauty and the Beast (2017) is different enough from the animated movie to be enjoyed and considered a remake. It’s gorgeous and elegant sets and costumes bring a sense of sophistication to this story. The transporting music is elevated and updated for this movie in a beautiful way. While it’s not a necessary remake, it’s a welcome one. I can definitely see myself actually wanting to watch this movie again.