Over the past week or so, there has been a ton of new content and promo for Steven Universe The Movie. Cartoon Network decided to make the focus of the Steven Universe panel on the movie. They even built a Beach City Stage where you can sing karaoke of your favourite Steven Universe songs. The poster and trailer have been revealed and the official single titled “True Kinda Love” was released. An official DVD release was also confirmed. It’s an exciting time to be a Steven Universe fan right now! 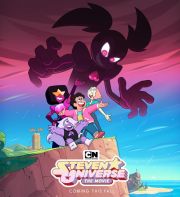 The movie itself looks amazing, the animation is fluid and smooth. The designs, colour palette, backgrounds, everything that has to do with visuals looks amazing. Obviously since this is a movie, the tone and visuals will be more cinematic and grand. The time jump gives the movie a chance to have some fun with how grown up the human characters are now, specifically Steven and Connie. The movie is written and directed by Rebecca Sugar so I know for a fact that it’s going to be emotional, funny and brilliant. The beginning of the trailer shows Steven and the Crystal Gems living their life happily. Steven is now 16 years old and is ready to start his happily ever after. 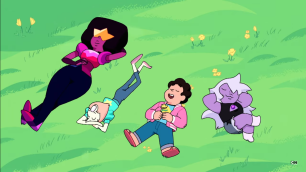 Of course there wouldn’t be a movie if Steven actually got his happy ending at the beginning of the movie so the new evil Gem enters the picture with a creepy face and an even creepier laugh. She plans to destroy all living things on Earth in less than two days and by the looks of some shots from the trailer, she is going to get awfully close as Beach City looks like a dead town. It’s up to Steven and the Gems to stop this threat however they will definitely have a hard time in doing so.

That’s basically the trailer. Now, Cartoon Network doesn’t make movies for every single show. The only shows which do have a movie are The Powerpuff Girls, Ben 10, Teen Titans, Regular Show and Teen Titans Go!. Even with those franchises, Cartoon Network didn’t really put in that much effort in advertising them, in fact only two of those franchises got theatrical releases, the rest aired on television, just like Steven Universe: The Movie. However, Cartoon Network is making up for the fact that it’s not a theatrical release with a fantastic promotional campaign. They are really taking care of this franchise and I couldn’t be happier.

Are you a fan of Steven Universe?
What did you think of the trailer?
Do you think the show will continue beyond the movie?