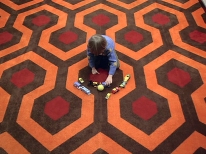 The Shining is directed by Stanley Kubrick and it is the cinematic adaptation of Stephen King’s classic book with the same name. In this movie, we follow the Torrance family and their stay at the ominous Overlook Hotel. After the stay has proved to be rather too much for Jack Torrance, crazy, twisted and disturbing events occur which will tear this family apart, from rivers of blood coming out of elevators to creepy twin girls insisting to play with you forever and ever. The movie stars Jack Nicholson, Shelley Duvall, Danny Lloyd and Scatman Crothers.

Although The Shining bombed when it came out, it’s become one of those movies which gets parodied intensely in pop culture. We all know the “Here’s Johnny!” scene. We all know about the creepy twins and the blood pouring out of the elevator. You would have to literally be living under a rock to not know about this movie. That being said the first time I watched this movie was this week, funnily enough. It’s one of those movies which is incredibly intimidating to watch because of its reputation, it’s like watching Star Wars or The Dark Knight for the first time. What’s funny is that I was twenty minutes into the movie before I found out I was watching the cut-down European version which I then changed and started from the beginning. Two and a half hours later I’m standing there in awe and complete unease at what I had just witnessed.

I’m going, to be honest here and say that this review was supposed to come out on Halloween but it got put off till now because I seriously didn’t know what to write about this movie. This is a movie which virtually everyone knows on some sort of level, every critic has given their detailed thoughts and theories and I honestly didn’t know if I had anything to add to that which hasn’t already been said. It’s been two and a half weeks and this review was driving me insane. I have never not posted on the blog for more than a week. However, I got my friend to watch it who also hasn’t seen it (or any horror movie at that) and his response gave me an idea for how I can make this review original and new.

The Shining is a masterfully crafted, insane and inexplicably wonderful experience which will linger with you forever and ever. This is the case for most movie buffs and horror fans as this is considered a classic masterpiece. I love and adore this movie and I was tense the whole way through. To me, The Shining is an incredibly unsettling movie with imagery and sounds that are just disturbing to experience. I did a ton of fascinating research on this movie, I watched every single piece of behind-the-scenes footage I could and watched every video analyzing the movie from a technical and story-telling point-of-view. I remember the day after watching it for the first time, a commercial came for it on a TV promoting it for Halloween. I remember actually feeling weirded out by it, not in a bad way just that my mind wasn’t ready to go back there just yet.

My friend’s experience, however, was incredibly different than mine. I thought this movie would scar him since the closest thing he watched to a horror movie was Joker but ironically he was almost untouched by this movie. Me being understandably in shock kept asking him questions but he just wasn’t scared or uncomfortable. I then sent him the behind-the-scenes footage and explained some certain shots and scenes and while it didn’t completely change his view, he did admit that it did help make the movie much scarier. Horror is understandably subjective, what scares me might not scare you. Some people prefer jumpscare movies over slow, tension-building horror movies but The Shining is the rare exception in the sense that in some shape or form, this movie gets under your skin and terrifies you one way or another. To me, the imagery and score were the most unsettling but for example, to my friend, the ambiguity and hidden references/foreshadowing creeped him out.

Stanley Kubrick directs the hell out of this movie. Watching him decide what a shot will look like or how a scene needs to be approached, it was simply fascinating. This Shining is very much a movie which is crafted in a way where every shot, frame and object is planned and thought out with ridiculous detail. This must be what directors think of when they think of a perfectly directed movie. The casting of Jack Nicholson and Shelley Duvall was perfect. Fun fact about me, I thought I would hate this movie because based on the clips I had seen of Nicholson in this movie, I thought I wouldn’t take him seriously because of his over-the-top performance. Gladly that wasn’t the case as from his first scene (the interview) Nicholson makes Jack an incredibly off-putting character based on his exaggerating faces and deadpan delivery. Duvall also brings an amazing performance to the movie and I am shocked to see how underrated Wendy is as a female horror icon. She’s smart, thinks rationally and took care of her son while her husband was, well you know. Danny Lloyd gives an eerily amazing performance as Danny. He was just six years old but whenever “Tony” came into the picture, he freaked me out.

While this movie is near-perfection, I do have some problems or issues. It might be because it was my first viewing but the second act dragged a bit, especially around the time Jack enters The Gold Room. Again, this was just from my first viewing, I don’t know if that will change upon repeat viewings. Another issue I have has to do with Jack’s sanity. The movie never makes it clear if Jack suffers from mental health issues. He seems fine in the first act but when a month passes he is already starting to lose it. We didn’t get to see the journey from sanity to insanity if there ever was one, to begin with.

Overall Stanley Kubrick’s The Shining rightfully earns a spot as one of the most influential and iconic horror movies of all time. With masterful direction from Kubrick and iconic performances from Nicholson and Duvall, it’s hard to argue with that. With it’s mesmerizing and immersive cinematography, disturbing imagery and haunting score there is truly something for everyone to be afraid of. It’s incredible legacy of keeping fans speculating about hidden references and especially that ending will keep fans longing to return to The Overlook Hotel forever and ever.