Birds of Prey (and the Fantabulous Emancipation of One Harley Quinn) is directed by Cathy Yan and revolves around Harley Quinn who is out to make a name for herself after her breakup with The Joker. Unfortunately, the people who she wronged are out to get her, one of them being Roman Sionis, a sadistic club owner who plans to own Gotham with a single diamond. The movie stars Margot Robbie, Ewan McGregor, Jurnee Smollett-Bell, Ella Jay Basco, Rosie Perez, Mary Elizabeth Winstead and Chris Messina.

We live in a time where comic-book movies are bigger than ever, characters you’ve never heard of before now have their own movie. The biggest movie of all time is a comic-book movie epic which destroyed mountains of records. This genre is thriving not only in Hollywood but even on the small-screen with countless shows. My point is that we can now delve into new territory with these characters and make truly unique movies. While I love and adore the Marvel Cinematic Universe, I have been really loving what DC is doing. I love how the approach they’re taking isn’t story-based like Marvel but instead, it’s an exploration of this rich world and each movie delves into a different sector of that world and develops it and that’s exactly what this movie does.

Birds of Prey is an extravagant confetti blast of a movie with a visual palette that would make Harley Quinn proud. The aesthetic it carries is drenched in vibrant colours, costumes and sets which give the movie a very unique feel. While it has a lot of Deadpool-level humour which is incorporated extremely well with the necessary r-rating, it’s entire aesthetic, amazing action sequences and killer soundtrack sets it apart from other comic-book movies. The movie serves as a reflection of Harley not only in how it looks and feels but also in the way it’s told. The decision to narrate the movie as if Harley is telling the story to a friend meaning she can forget certain details and go back to them later in the story is brilliant. It makes the audience feel like they can really go through this journey through her eyes. 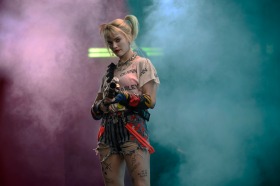 What this movie benefits from the most is it’s very necessary R-rating which gives it the freedom to be as violent, hilarious and inventive as it wants to be and that’s one thing I can really admire. The movie even begins with an animated prologue and later on, a flashy musical number occurs when Harley is punched several times. There’s a great range of action going from wacky car chase to John Wick inspired action thanks to Chad Stahelski. The movie also uses the r-rating to up the humour with some great moments of physical humour which Robbie nails. Harley’s personality is very much woven into the DNA of the movie. It’s silly, fun and morally questionable.

This topic is sensitive so I won’t go into too much detail but I really hate the fact that just because a comic-book movie stars a woman or a group of women it has to be some woke masterpiece. I think part of normalizing blockbusters with women in them is to just let them be whatever they want to be. Apart from having some feminist notes in the narrative here and there, I wouldn’t say that Birds of Prey is trying to be “woke” and it doesn’t have to be. It’s a fun action movie and the stars just so happen to be women. Also, the rant that the movie is sexist (which is not the case) because of the way it treats men is simply a reach. This is a movie set in Gotham where virtually everyone’s pretty much an a**hole, the fact that Black Mask has an all-male army makes sense since he actually is a misogynistic person. As a guy, I was never offended or felt anything in that sense.

As one of the best parts of Suicide Squad, Margot Robbie continues to shine as Harley Quinn in this movie, she has truly made this character her own. She’s over-the-top as expected for this character but it never feels like she doesn’t belong in the world the movie created. Ewan McGregor is delightfully over-the-top as Roman Sionis, I gained five more years whenever he would yell “eww!” in disgust while using a weird American accent. Jurnee Smollett-Bell is great as Black Canary, she’s not used a lot but she does the most with what she’s given. I loved Ella Jay Basco as Cassandra Cain, she was hilarious and I loved her relationship with Harley. Rosie Perez was fine, I definitely felt for her character but I feel like she could’ve been written a bit better. Mary Elizabeth Winstead is a standout which is very impressive considering how little she’s in the movie. I love Huntress, she has a ton of hilarious moments and Winstead executes them perfectly. As for Messina’s Zsasz, he and McGregor’s Sionis have an incredibly gory introductory scene which definitely left a lasting impact on me because I was genuinely scared of him throughout the movie.

Overall, Birds of Prey guarantees a fantabulous time. It’s another win for DC and Warner Brothers who continue to give us variety in their comic-book movies. I would go so far as to say that this is actually in my top ten comic-book movies of all time. It’s over-the-top but at the same time, it’s very small scale. It doesn’t worry about sequels or spin-offs, it’s all about having a great time which the movie delivers on thanks to sleek action sequences, a killer soundtrack and having Harley Quinn’s personality woven through the movie whether it’s the script, music choices, humour or even heart. Now if you’ll excuse me, I’m gonna go make an egg sandwich.