A special part of becoming a ‘Star Wars’ fan is discovering the infamous Holiday Special and cringing as you try to watch parts of it. If there’s one thing the entire fandom can agree on, it’s that it was a mistake. With the excuse of a new streaming service, Disney and Lego have whipped up a new holiday special with all your favourite characters, new and old and it’s safe to say that this new special is one with the force.

Spoilers are included but you can still fully enjoy the special having known them.

Sitting at forty minutes, ‘The Lego Star Wars Holiday Special’ manages to have the cheeky, self-aware humour we’ve come to expect from Lego and the heart and emphasis on family that we’ve come to associate with Star Wars. Essentially the special is about Rey training Finn the Jedi ways and she finds out that there is a key which teaches you exactly this. The catch is that it’s useful on Life Day so she goes on a solo mission to find it. Once she does, she travels throughout the Star Wars timeline and learns valuable lessons from the masters before her. It’s very interesting and honestly bittersweet that we see Finn finally training to be a Jedi under Rey’s wing and it’s in Lego form. Not to diminish Lego as a brand but seeing it teased in ‘The Rise of Skywalker’ and never getting developed as a concept was such a missed opportunity. When it comes to underdeveloped characters in the sequel trilogy, Finn sticks out like a sore thumb so I was happy to see that he at least got something better to do, even if it was in Lego form. 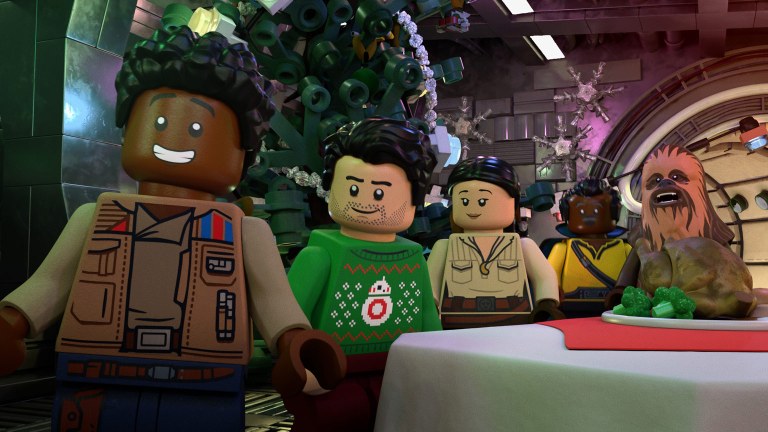 Admittedly I was a bit hesitant when I saw that forty minute runtime. It didn’t help that the special started out a bit rocky but once Rey finds the key, the special kicks into high-gear with humour and only the amount of absurdity and self-awareness that a Lego Star Wars special can achieve. The amount of meta-jokes and references will make any Star Wars squeal. It delighted me to see that not even the sequel trilogy, specifically ‘The Rise of Skywalker’ was safe from getting roasted by this special. It never treats the franchise as this perfect masterpiece, it calls out stuff for what it is, it pokes fun at the plot-holes and it does a great job at doing so.  It became such an entertaining forty minutes that the time really ran by. It’s fast-paced, funny and it’s perfect to watch with the family all snuggled up.

With this special interacting with all three trilogies, it’s basically a Star Wars’ fan’s wet dream but what’s odd to me is that if they’re gonna go that far, why not go all the way. We see characters from all the cinematic episodes but we don’t see a single Rogue One character or Young Solo interacting  with the other Solos in the special. Not to sound whiny but again, we saw ‘The Clone Wars’ versions of Anakin and Obi-Wan but I don’t believe we saw Ashoka or any ‘Rebels’ character. Why not bring them into the fold if they also have powerful force moments to learn from. All of this being said, the fan-service that we do get is more than satisfactory. From the return of ‘Ben Swolo’ to older Han and younger Han shooting Greedo together AND first, there is so much to love about this special.

How does this compare to other holiday specials? Well, I don’t know if you’re like me but I have a soft spot for holiday specials. The same goes for movies, I don’t really critique them based on moviemaking or actual quality, if they made me feel festive then they did their job. Would I say it’s a new Christmas tradition? Not really, the special focuses more on the references and the franchise than actually being a festive special which is probably why they released it this early. It’s not bad but I can definitely think of more festive specials than this one. The special never even makes it apparent that Rey literally spent most of Life Day away geeking out about her masters instead of it spending it with her friends. I thought that she would travel back to the beginning of the day and stop past Rey from going at all, it’s actually quite frustrating when you start thinking about it. That being said this special knows exactly what it is and it runs with it. It’s not tradition worthy but it’s miles better than the previous special. It’s entertaining, funny and sure to please Star Wars fans of all ages.